Cruising Along the Wild Atlantic Way 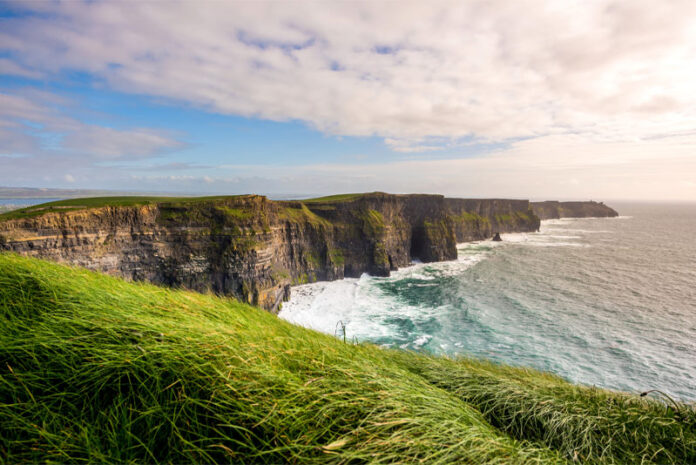 Breathtaking cliffs, forests and lakes await you on this west Irish coastal route. By Vicky Chong

The Wild Atlantic Way is a 2,600-kilometre trail that stretches across the length of west coast of Ireland. It begins on the Inishowen Peninsula in County Donegal and goes through the counties of Leitrim, Sligo, Mayo, Galway, Clare, Limerick and Kerry before finishing in the County Cork town of Kinsale.

Our journey began at Connemara in County Galway, where we had the first glimpse of the Atlantic Ocean. Our first two nights were spent at an ocean-facing bed-and-breakfast owned by a recently retired second-generation postmaster in Clifden Peninsula, a charming little seaside village that took us back to the medieval era, with its thatched cottages and castle ruins dotting the area. The house we stayed in boasted a castle façade that was built by his grandparents and which operated as the village’s post office for many decades until its closure in November 2018.

At Connemara, we visited Kylemore Abbey, a Benedictine monastery. Once a castle built by pioneer politician Mitchell Henry in 1850 for his wife Margaret, the property is now occupied by Benedictine monks, though the public is welcome to visit the compound, which also boasts a beautiful Victorian walled garden.

Departing Connemara, we drove south towards Ballyvaughan, stopping on Quay Street for lunch. Quay Street is the main tourist street in Galway City, and is lined with cafés, bars and shopping malls, with buskers providing entertainment as we strolled along the cobbled street.

From Galway City, we made a short detour to Aillwee Cave to view its spectacular caverns and bear pits, where the bones of a bear from early 20th century still lie. Not far from here were the Cliffs of Moher, Ireland’s most visited natural attraction. These jagged cliffs rise to 214 metres and comprise rock layers between which seagulls and puffins regularly nest.

Ballyvaughan was to be our base for the next five days, as we had planned a few hiking trips to the Burren and the Aran Islands from here.

The Burren boasts a unique landscape in this region; it made up of layers of limestones, which form a backdrop of rocky hill on the opposite side of the Atlantic Ocean as we cruised in between. Farmers use the rocks to fence and mark borders. From afar, the Burren may look bare and lifeless, but up-close, we found wild flowers that sprung in between crevices as we traversed the uneven terrain during our hike.

As we hiked further inland, the rocky formation gave way to a lush green forest, with wild garlic greens carpeting the forest floor. We followed a sign to a “holy well”, an enchanted fairy tale enclosure that contrasts sharply with the limestones a few hundred metres away. The surroundings here, tinged green with whitethorn trees, ferns and mosses, were calming. A continuous babble could be heard from a running spring that meandered lazily from an unknown origin higher uphill, completing this charming paradise. The Burren has an amazing 40 such holy wells, which are believed to be sacred, while hundreds of these can be found all over Ireland.

One attraction not to be missed while at the Burren is the Poulnabrone dolmen, a portal tomb built between 3800 BC and 3200 BC. Some call it the Irish Stonehenge, but to this Singaporean, it looked like a mini Marina Bay Sands.

Located west across the main land is Aran Island. Taxis, horse carriages and bicycles are available for rent, but we decided to walk. Our destination was Dún Dúchathair (The Black Fort). For a yoga practitioner like myself, climbing up the stoned wall of the fort to look down on a stone formation that resembled the Sanskrit character for om (ॐ), was a surreal experience.

One can’t go to Ireland and not visit an Irish pub. On our last evening in Ballyvaughan, a local friend who was a musician invited us to a pub, where he had arranged with its owner to play a set. That night, I was drunk in Irish hospitality, complete with glasses of Guinness stout and a singalong session of pop and Irish folk songs.

Moving from Ballyvaughan, we next stopped in the small port town of Dingle, located on Dingle Peninsula in the southwest. Here, we took an eco-marine boat cruise around the Blasket Islands to watch Fungie, the sole resident dolphin of Dingle Bay, as well as seals and puffins.

Our journey on the Wild Atlantic Way ended at Killarney, situated in the south-western corner of Ireland and famous for its beautiful mountain ranges and three lakes. We visited the Killarney National Park and Torc Waterfalls, both of which are easily accessible for casual walkers.

Driving the Wild Atlantic Way brought us to the heartland of the Irish west. Much of the journey took us down a two-way single-lane highway, passing by small towns and housing estates. And while Irish weather has a reputation for being notoriously dreary and wet, we were fortunate enough to enjoy had many days of beautiful sunshine during our spring visit. With delightful weather, beautiful landscapes and warm, friendly locals, there’s plenty to enjoy while cruising along this spectacular coastal way.

Yoga is more than just the gravity-defying poses you see on social media. When practised correctly, it offers a full mind and body workout....
Read more
Be Inspired

Heritage-inspired design has popped up in local lifestyle stores in various forms, from gem biscuit cushions to kueh tutu badges. What has spurred this...
Read more
- Advertisment -